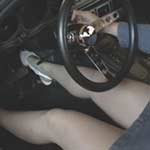 In this clip, Rose attempts to take the cameraman to a social gathering nearby. Her dependable Echo is in the shop, so she must rely on the old 74 Celica to get her there. However, it puts up a fierce battle and does not want to catch at all but it does sputter and come to life. Then there is some flooded cranking play at the end of the clip with her bare feet.