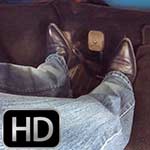 Back to the Bug with Roxy as she zipping around these roads, going through the gears in the little ’72 Super Beetle. When she slows down and makes the turn into the driveway, it is a rough entrance that goes right into an incline and it tends to throw girls off and they often stall cars right there. Roxy does and the Bug floods out a little bit and makes it rough to start again. She gets it fired up and with a little help from me holding the parking brake to keep her from rolling back into the street, she gets us moving forward again.