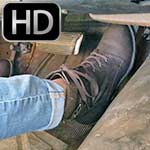 A little cold start and drive with Sasha Lux. She’s wearing a pea-coat, jeans and some brown lace-up boots. A mostly casual drive with some good romping of the gas when she gets to the house. Gotta make sure it’s nice and warmed up! 🙂