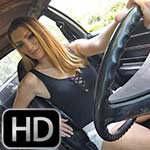 She gets the old Dodge started up and revs it with her super long legs in some itty bitty shorts. She gives it a good revving once the engine is started. Two different angles in this clip (no pip). One from the passenger side and one from the front windshield.