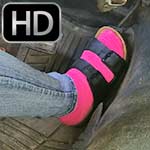 She struggles to get the Monte Carlo started. It teases her by sputtering and wanting to run but if you don’t feather the gas pedal just right it’ll give you the middle finger! lol She works the gas in pink socks and brown leather birkenstocks.

One thought on “Sasha Lux Cranking in Pink Socks & Birkenstocks”