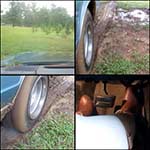 Scarlet Playing in the Mud During a Tropical Storm (Pedal Fantasies)

Scarlet is narrating this clip as she takes you to a muddy field to play in some mud.  Lots of views of her filming the rear tire spinning in the gooey mud and her boots working the pedals.
*Pedal Fantasies clip*