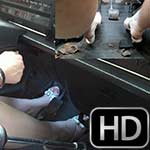 First part of the video is her trying to get the Volvo started and moved out of the way.  It’s blocking the car she takes to work.  She’s in her pajamas and wearing a pair of flip flops as she fights with the stubborn old wagon.  After wasting too much time, she decides to go change and deal with it when she’s dressed.  She then returns in a black dress and pink/white peep-toe slides and tries once again to get the car started and moved.  Unfortunately, it just won’t start and she’s forced to call in to work that she’s going to be late.

One thought on “Scarlet Cranking the Volvo – #398”