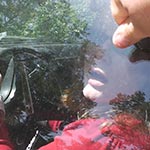 Since today is 3/3/2013, I thought it’d be a good idea to give you all a triple dose of Scarlet on this ‘Scarlet Sunday’!  Over 35 minutes of Scarlet pumping pedals for your enjoyment!  Let’s start the dosage with this custom video:

Scarlet is supposed to be spying on someone but the tables soon get turned.  The spy is now the spied and she’s got to get away!  Her foe approaches and in her panic, she’s flooded her car…