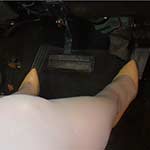 Scarlet can’t get her car to start and ends up draining the battery from repeated attempts at starting the car.  She tries pumping with her stiletto pumps on and also in just her nylon-clad feet, neither works!

One thought on “Scarlet Cranking the Coronet – #296”