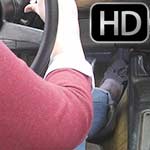 Finishing up this month of 30 updates, who better to bring our ’10 Year Celebration’ month to a close than Scarlet herself.  She has a ton of issues with this car today.  She has to stop and get gas before heading to a fast food joint to pick up some food for the crew.  She has issues leaving the driveway and after getting gas but when she goes to get food, the car won’t start after order the the food at the drive-thru.  Some employees end up pushing her out of the way.  She lets the car sit while she runs in to get the grub and that seemed to do the trick as she is able to get it started up again.

One thought on “Scarlet Cranking the Camaro – #338”