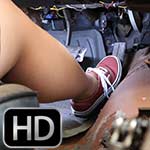 It’s an over-cast and chilly day today and Scarlet uncovers a red Camaro that is for sale and is exactly what she’s been looking for! She wants to buy it but wants to see how it runs. The seller gets in the passenger seat and Scarlet explains she knows how to start these old cars, she’s no stranger to them. She explains if it’s been sitting for a bit, she might have to pump the gas to get it started. She gives it about half a dozen pumps with her red Vans sneakers and turns it over….just cranks. She keeps pumping and tries again…still it just cranks. It’s not wanting to start and she eventually asks if it has had carburetor work or if there is bad gas in the tank. The car is sputtering and running rough now but hey, at least there is some progress!

One thought on “Scarlet Cranking the Camaro – #450”