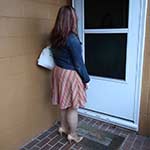 Scarlet is visiting a friend but when she knocks on the door, there is no answer. She waits for a bit before deciding to leave and is unaware that the ‘gremlins’ have messed with her car. She hops in, turns the key, it doesn’t start. She tries again and still nothing ( no pedal action yet). She is dumbfounded as to why it aint starting. She twists the key and gives the gas pedal the pump and grind but it still doesn’t start. She tries mostly long twists of the key and pump and grind but all she gets from the motor is the raspberries. She stops after a few attempts and grabs her droid but it is dead. She goes back to cranking and pumping and begging it to start as she is feeling a little creepy.
After a few more attempts she pulls off her tan pumps and puts one next to her for protection and tries cranking and pumping in her stocking feet. By now she realizes it flooded and gives up realizing her car and phone are dead. She tries to open the door but it wont open! She gets frightened as she pounds on the door yelling, “Lemmie out! Lemmie out! Please, lemmie out!!”