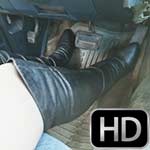 Scarlet Cranking the Monte in Boots & Delivery Driver Shows Up

She’s in the driveway cranking the old Chevy Monte Carlo to move it when she looks in her rear-view mirror to see the delivery truck is right behind her. Well…I guess now is a good time to give the car a rest. lol She gets her package, the guy leaves and she gets back to trying to crank her car up in these flat leather over-the-knee boots.