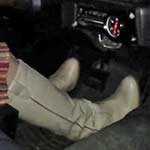 She’s dressed up and ready to go out but the old Monte Carlo isn’t. It’s running like an absolute turd and keeps stalling on her. You can hear how bad it runs when she gets it started here and there. She tries revving it to clear it out so it’ll run better but damn, it’s just not happening.