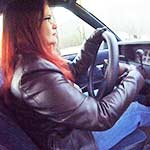 She’s not in the mood to fight with the old Chevy but it doesn’t care about her feelings. As a result, she’s pissed off and takes out her frustrations on the car by cursing and yelling at it as she beats up the gas pedal some.

One thought on “Scarlet Aggressive Cranking in Boots, Leather Gloves”