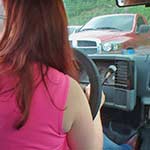 It’s a pretty hot day, you can tell by how red Scarlet’s cheeks are. She’s leaving Wal-Mart after getting some things and her damn car is not starting. Various angles show her struggle to get the car to sputter and almost start time and time again…grrr!!! She’s getting frustrated because it’s so close to starting, why won’t you start?!
She’s wearing a pink tank top, long boot-cut jeans and red leather cowgirl boots.

One thought on “Scarlet Flooded the Monte in Store Parking Lot”