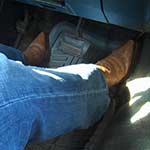 Scarlet Drains the Battery Cranking the Monte in Tan Boots

Her stubborn and temperamental clunker wins again! Lots of sputtering, begging and pleading for it to start but no dice. Her tan leather cowgirl boots pump the gas pedal all the way till the battery is completely drained.