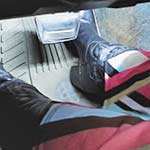 I hear the sound of her car not starting when she was supposed to already be gone. I step out and sneak a peak from behind the bushes at her cranking the old Monte Carlo. I let her try for a while before walking over. She keeps trying while I watch from the drivers side looking in at her black leather cowgirl boots pumping the gas pedal to get her old clunker to start.