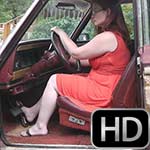 Scarlet is trying her best to keep her calm and to get the Jeep started.  She’s got a surprise party planned and the damn Jeep is on the verge or ruining it for her!