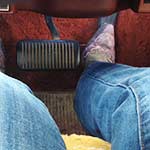 This series shows Scarlet filming herself as she starts various cars in her daily outfits which mostly consist of cowgirl boots. Most of the clips are filmed with her phone that she pulls out to film from her point-of-view because these cars are cranky. Sometimes she’s leaving to go run errands, sometimes she’s getting a car for a video or picture set and sometimes she just wants to go out and see if she can get a car started.

One thought on “Scarlet Cranking Cars in Cowgirl Boots Compilation, 1 of 7”