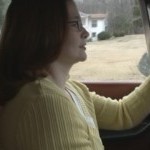 So we just had the brakes on the Volvo tweaked and Scarlet is taking it for a test drive.  This is the first time the Volvo has been driven in quite some time (before the recent Barbie driving clip).  It seems to drive okay and fortunately, it stops okay too.  Scarlet drives down some roads near the house so that if something does happen, we’re not too far way.

One thought on “Scarlet Test Driving the Volvo in OTK Boots”