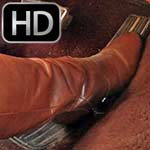 They’re heading to town for some errands and are taking the big ole Caddy. Scarlet is wearing her brown leather Frye over-the-knee riding boots. It takes a few tries to get the engine fired up and her boots just *thumpthumpthump* on the gas pedal. She gives it a few revs and they head out. She floors the pedal to the floor often and when she can’t floor it while driving, she puts it in neutral to rev up the engine.