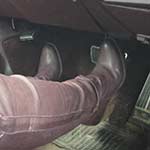 Back before it had the proper exhaust installed, this old Caddy sounded like some kind of dirt-track race car when it fired up. Scarlet gets it cranked up and is gentle on the throttle because the engine was brand new. So we were driving it some to break it in a little bit. She drives it to run a few errands on an overcast day.