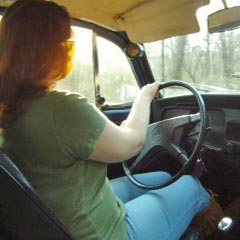 Scarlet Drives the Bug in Moccasin Boots Then Socks, 1 of 2

She fires the old Bug up and takes it for a drive through the twisty country-side wearing these brown suede moccasin boots. She floors it and bangs up and down through the gears with a camera over her shoulder and from behind-the-pedals.

One thought on “Scarlet Drives the Bug in Moccasin Boots Then Socks, 1 of 2”