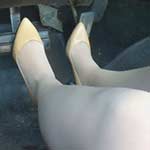 Gotta make a quick pit stop in the Coronet to get some good ole push-fuel (aka gas).  Scarlet drives the car a bit cautiously because it’s acting funny and the brakes are sticking.  She makes it to the gas pumps and we get gas.  The video cuts to her leaving and heading back to the house.  Her pantyhose show up well in the light and her tan leather pumps shine as her foot goes back and forth from the gas to the brake.