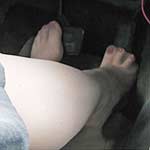 Scarlet Driving the Monte in Skirt, Hose & No Shoes

She’s running some errands while I film mostly her feet in this clip. She’s got her pumps off and you see her red toes through the sheer tan pantyhose she’s wearing. Lots of waiting at traffic lights in this clip. She rests her left foot on the brake pedal and two-foots the car a lot. She strokes the gas pedal sometimes and one time, she gets too carried away playing with the gas that she stalls the car out at a big intersection.

One thought on “Scarlet Driving the Monte in Skirt, Hose & No Shoes”