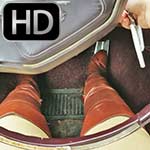 Scarlet Running to Parts Store in Caddy in OTK Frye Boots, 1 of 2

We get in the Cadillac to run some errands but this baby is not wanting to start. It teases her by starting up after a try or two but if you give it just a smidgen too much gas, it conks out and then gets really hard to start again. She’s pumping the gas pretty firmly and you can hear the ‘thump thump’ each time her boot pumps the pedal. She ends up draining this first battery, so I swap it out for a fresh one and I guess that’s all the car wanted because she gets it cranked up then.
Before hitting the road, she gives it some good revs to make sure it’s cleared out and warmed up. She opens the door and leans out while revving, you know, to check the exhaust. 😉
Now we’re ready to go and she backs out onto the road and we head to town with her flooring that gas when she can and sometimes putting it in neutral and revving while coasting.

One thought on “Scarlet Running to Parts Store in Caddy in OTK Frye Boots, 1 of 2”