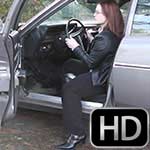 Scarlet is going to warm the car up but is having trouble getting it started on this cold morning.  She stomps the pedal as she cranks the car over and over again until it finally starts.  Now she can rev the piss out of it and take some of her frustration out on the motor!