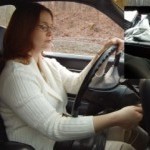 The Coronet is stalled on the side of the road with a weak battery after filming a custom video.  I’ve got the Blazer hooked up to the Coronet with jumper cables so Scarlet can get it running.  It’s flooded really good from the custom and she spends a couple of minutes trying to get it started.  It sputters a few times before finally running somewhat smoothly.  She revs it for a bit to make sure the battery is charged and the engine is cleared out.  I disconnect the cables and she takes off for an aggressive driving clip down the country road and back.