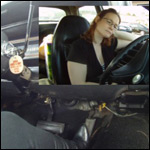 Scarlet Crank & Drive the Coronet in Scrunch Knee Boots, 1 of 2

This is a cranking and driving clip of Scarlet running some errands in the old Coronet. The main camera is on the pedals while the picture-in-picture camera is on the dash getting her upper body and face. She has to struggle to get the car going in the driveway but she gets it fired up and drives through traffic to the grocery store. She floors it when she can and plays with the pedal some during this 18+ minute clip. Once we get to the store, the video fades out.

One thought on “Scarlet Crank & Drive the Coronet in Scrunch Knee Boots, 1 of 2”