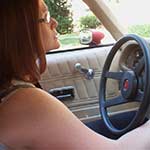 She’s making a trip to see Cassandra and is taking the Camaro.  This car can be about as temperamental as they come and today is one of those days.  Scarlet works the gas pedal good, trying to start the Camaro before killing the battery.  After a few minutes, she manages to get it running and takes off.  She floors the gas, speeding in the old pony car on these backwoods country roads.