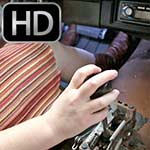 Scarlet “There & Back Again: A Models’ Tale” in the Camaro

She’s gotta run back to HQ to get something so why not take the quickest car we have, right? She gets in the Camaro and has some trouble getting it started and keeping it running. She manages to get it cleared out and gets on the road where she hits the gas to make up some time. She throws the car in neutral to rev it up at times, that old 350 sounds good!
She pulls into the driveway, romps the gas one good time before getting out to fetch her item. She gets back into the car, rapidly pumps the pedal while cranking it up again, revs it and starts doing it all over again before the video fades out.

One thought on “Scarlet “There & Back Again: A Models’ Tale” in the Camaro”