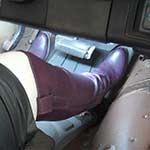 She struggles to get the car started in her purple leather boots, leather skirt and button-down blouse. The car finally starts but isn’t running smooth and keeps dying on her. When it is warmed up enough to drive, she gets on the road and starts driving back to the house. It stalls on her at a stop sign and is hard to get started again. She drives aggressively and revs it some while coasting.