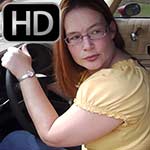 She was out enjoying an afternoon at the park and when she tries to leave, the old Camaro doesn’t want to start for her. No one bothers to help, which is fine because she manages to get it started and drives home.
She’s wearing jeans and brown leather knee high boots over them.