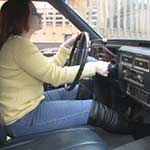 Finishing the week off with Scarlet giving the long-gone Fleetwood some loving abuse.  We’re shuffling cars around and she needs to move the Cadillac so we can get to the other cars.  It’s not cooperating with the whole starting thing.  You can tell she’s really having to fight with it to get it running.  When it does run, she revs it up and starts moving it but it keeps stalling.  By the time she does get it moved out of the way, the engine is steaming, the battery is just about dead and there are some other smells indicative of burnt wires and rubber.  This engine is already knocking and I think we scrapped it a few weeks after this video.

2 thoughts on “Scarlet Moving the Busted Fleetwood in OTK Boots”