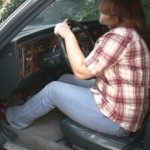 Scarlet has changed outfits and is trying to get the Cadillac moved from the deep ruts she created earlier.  The Caddy is running rough and is hard to start and keep running.  She does eventually get it out and proceeds to park it on the drive way just as it begins smoking.

One thought on “Scarlet Cranking & Spinning Tires in the Caddy”