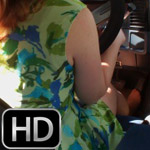 Scarlet Cranks the Monte Carlo to Move It in Pumps & Hose

She has a hell of a time to get this thing started and when it is running, it stalls almost every time she takes her foot off the gas.  She’s trying to get the car moved so we can use the driveway.  Her white stiletto pumps works the gas pedal as the sun shines on her pantyhose.  She later slips off her high heels to get a better feel of the gas and brake pedals with her stocking covered feet.