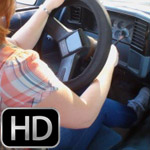 Another day of running errands with Scarlet and this time, she’s wearing some skinny jeans paired with Reebok sneakers.  We have multiple errands to do and we make a lot of stops.  Of course, with the Monte Carlo, some stops end up being stalls and some are longer than others.  We even stop at the nearby high school to pick up something from a friend and the damn car takes forever to start again!  When Scarlet isn’t fighting the Monte Carlo, we’re cruising along to the next destination.

One thought on “Scarlet Running Errands in Skinny Jeans & Reeboks, 3 of 3”