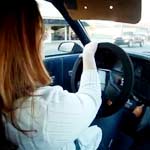 Ride Along With Scarlet As She Runs Errands

Scarlet has some errands in town to run this evening and you get to ride along with her as she makes her stops.  This 31+ minute clip has a lot of different driving as well as some really hard starts in various parking lots.  If you’ve ever wondered what type of ‘adventures’ a woman has with an old clunker, this is a front row seat to the action.  This is another one of our as-real-as-it-gets clips that can’t be topped.

One thought on “Ride Along With Scarlet As She Runs Errands”