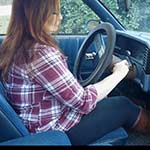 Scarlet Struggles to Clear Out the Monte Carlo that Reese Flooded

The Monte is sitting crossways on the driveway from where Reese stalled it when backing it up out of the bushes. Reese is changing for the the next video so I get Scarlet to come out and see if it’ll start. It’s barely running when she does get it fired up and keeps stalling out. She works the process for a bit until she’s finally able to get it juuuust right and clear it out!