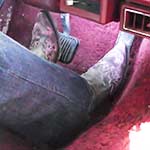 Some cranking to get it started and some driving to get us going…with a stalling scene. Great boots to drive around in the old Jeep.