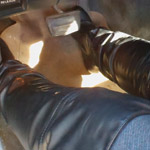 Scarlet Shuffling the Cars Around in Black OTK Flat Boots

It’s time to move some cars around and Scarlet handles it in some leggins and new black flat leather over-the-knee boots.  The Monte Carlo starts out by not starting.  It spins over strong but doesn’t want to catch.  She decides to come back to it later.  She proceeds to then move the Coronet, Bus and Bug around.  The Bug and Coronet don’t give her too terribly much trouble, the Bus gives her none and when she does come back to the Monte Carlo, it eventually starts and she can now move it.

**This clip has issues playing in VLC player.  I recommend using Windows Media Player.  Sorry for the inconveniece!**