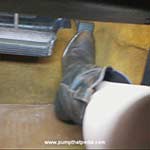 For those of you that don’t know, Scarlet purchased the 1986 Monte Carlo for her site when we had a stint apart from each other.  She loves that car, even though it’s a clunker.  You don’t hear girls saying that about old junk cars often but it’s true, she does like taking it to run errands and on the days she might not want to fool with it, she still knows that it needs to be driven often to keep it in shape.  A lot of these are filmed by Scarlet, most are filmed with her phone.  There are a few ‘pedal play’ segments throughout these various compilations.  Sometimes, Scarlet just wants to play with the pedals for poops-n-grins! 😀  While most of these will be in the Monte Carlo, there are some other cars mixed in as well.
You’re not going to find a better display of natural, real and authentic cold-start/old-start’s than this stuff here.