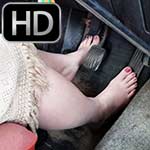 Scarlet Stuck in the Volvo Reversing Barefoot, 1 of 4

She headed over to where we had the cars temporarily parked to get the Volvo for some videos. Jane is filming, so the video is about as real and as casual as it gets. We’ve used this spot for a few weeks now without any issue. She gets the Volvo started but when she tries backing up, you hear that slight whine from the transmission when the rpm’s go up but there is no movement. Scarlet isn’t a stranger to being stuck, so she’s not worried because with a little slight rocking, she’ll be able to get it out, right?

One thought on “Scarlet Stuck in the Volvo Reversing Barefoot, 1 of 4”