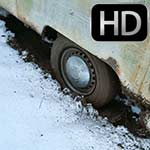 This was a couple of days after Diana left from her most recent shoot. The last video I did with her was an unintentional stuck video. It had been raining that whole day and long story short, she got the Bus stuck and let me tell you…VW Buses get stuck easy! I don’t care what you’ve heard about rear-engine blah blah, that sucker got stuck quicker than…something…that gets stuck very quick…yeah.
Fast-forward to this day. I figure make use of the snow and give a challenge to Scarlet, since she is pretty good at getting vehicles unstuck. She finds out quickly that that Bus does spin the wheels very easy. 🙂

2 thoughts on “Scarlet Stuck in the Bus, December Snow Day”