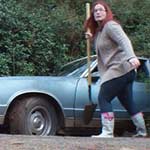 Scarlet Stuck in the Bushes Barefoot, 4 of 4

So Scarlet has finished some digging, she’s gonna try again to get the Monte Carlo unstuck.  She climbs in from the passenger side after taking off her muddy boots and starts rocking the car again.  Unfortunately, it’s the same thing…very very little movement, the hole Hana dug is too deep for the Stuck Queen Scarlet to get out. 🙁

One thought on “Scarlet Stuck in the Bushes Barefoot, 4 of 4”