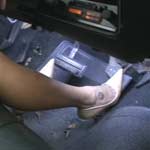 The girls are still having fun stomping the gas pedal to the floor in the old Dodge!!