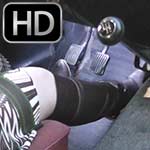 Scarlet Driving the Volvo with Cassandra & Being Followed

As they pull out of the driveway, Scarlet is driving, they notice this vehicle immediately starts to follow them.  They nervously talk about it and Scarlet tries to outrun this creeper in the old Volvo.

2 thoughts on “Scarlet Driving the Volvo with Cassandra & Being Followed”