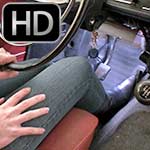 They take turns starting up and revving the old Volvo. Cassandra is wearing black boots over her jeans and Scarlet is wearing tan boots under her jeans.