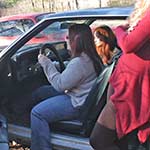 The Monte Carlo wouldn’t start for Cassandra, so while out running around with Scarlet and Vivian, they all decide to stop by and see if one of them can get it running. They all take turns but the Monte Carlo is flooded too severely to start. They kill the battery in the process.
Cassandra is wearing leggings, black cowgirl boots.
Scarlet is wearing jeans and black cowgirl boots.
Vivian is wearing leather jacket, gloves, jeans and red knee high boots.
**Turn up the brightness in your player.**